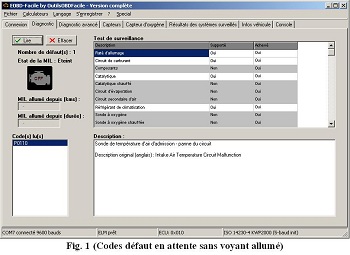 The image opposite (Fig. 1) shows a diagnosis done on a Citroen Saxo 1.6 16v. Although there is no fault indicator lit on the dashboard, a reading done using our EOBD-Facile software reveals a problem. The ECU is showing a P0110 fault code, indicating a malfunction in the air temperature sensor circuit.

How the CTN sensor functions

Confirmation of the defect 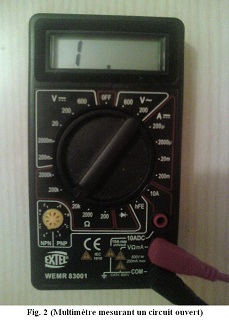 With this data, the sensor would seem to be at fault. Using a multimeter set to ohmmeter (Fig. 2), measuring the resistance at the sensor terminals shows a "1" on the left of the screen meaning the circuit is open caused by a sensor malfunction.

After replacing the air sensor, the fault code can be cleared using the clear button. The engine will now operate more optimally knowing the real air intake temperature. To confirm that the repair was successful, redo an OBD reading after doing a drive cycle.

One question remains: why did the malfunction of this sensor not appear on the dashboard? Not all faults are considered critical enough to lead to an alert for the driver. For the air temperature sensor, the injection ECU will use a default value or an estimate that will replace the real value no longer available.