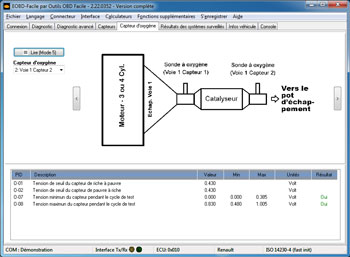 Failure P0420 turns the dashboard engine light on, , it may be the cause of a relatively serious problem or vehicle pollution. In the case of a P0420 error, the electronics have detected a fault in the catalyst which can cause excessive vehicle pollution. The software window opposite gives a picture of the configuration of the vehicle exhaust. In our case, on a 4-cylinder engine, a single exhaust line is present and it is provided with two oxygen probes (also called lambda probes). The main role of the lambda probes is to measure the amount of air in order to control the richness of the air / fuel mixture to be burned in the cylinders.

Oxygen sensor Bank 1 Sensor 1: (upstream probe) is mainly used to manage the amount of fuel to be injected into the engine.

Oxygen sensor Bank 1 Sensor 2:(downstream probe) is mainly used to measure the effectiveness of the catalyst.

Confirmation of the catalyst problem 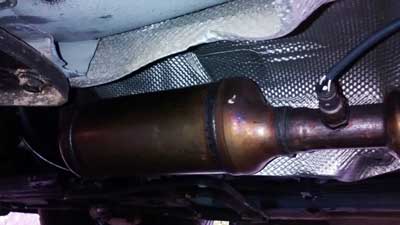 In the case of our fault, the ECU motor has detected, through the measures taken by the oxygen probe, a problem with the catalytic converter. However, the diagnosis should not be solely based on this information, before checking the following points :

If no other faults are found, replacement of the catalyst is therefore likely to be the cause of the failure. Catalysts having a limited lifespan (approximately 90,000 to 125,000 miles).

When changing the catalytic converter, one should also question whether or not it is desirable to change the oxygen probes. Indeed, the oxygen probes have a limited lifespan, approaching that of the catalytic converter (100,000 miles). Consult, with the help of the software, the operating measured values compared to typical values of the probes. Measured values too close to the maximum or minimum value generally indicate a probe near the end of its life. This information is available in the EOBD-Facile software either in the "Oxygen Sensor" tab or in the "Result of monitored systems" tab. 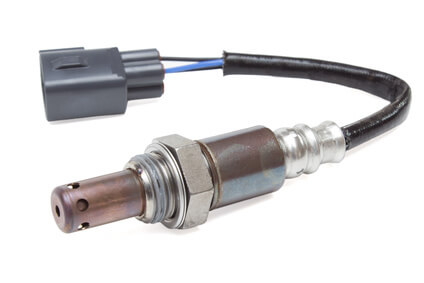 - the 22/04/2020 by it may not make a difference
the catalytic converter in certain states (like Virginia) makes no difference and is not considered in state car inspections. So a car showing the O2 sensor is faulty may not need attention for that at all.