Cars contain more and more electronics and the systems are becoming increasingly complicated, which is why it has become essential to be able to access this information. The OBD2 port has therefore been adopted by car makers and is available in all vehicles.

The OBD standard (On Board Diagnostic) was implemented initially by the CARB (Californian Air Resources Board) to control polluting emissions from vehicles. The arrival of electronic computers to manage the engine and associated computers enabled vehicles to reduce their pollutants. The OBD states that a vehicle should permanently monitor the smooth operation of the engine throughout its life.

There are several OBD standards:

EOBD was implemented in Europe at the same time as the EURO3 standard for pollutants from vehicles. It states that emission failures must be signalled by means of an indicator on the dashboard and that the codes corresponding to the detected failures must be recorded by the vehicle.

Standards and dates of application

As a result, since EURO3 and the European directive 98/69/EC, the standard is applicable depending on the vehicles from the following dates:

Some vehicles not covered by the directive may nevertheless be compatible. It depends on how much manufacturers are in advance of the new directive and their willingness to implement the standard.

PS: It should be noted that commercial and company vehicles are also affected by this directive, but their application dates are different (2006/2007).

Euro 3 and its directive announced the arrival of a new indicator on vehicle dashboards. The MIL for "Malfunction Indicator Lamp" is an icon representing an engine unit in orange/yellow (red is prohibited) specified by ISO 2575. Opposite are some examples on various vehicle models.

This indicator is used to signal a problem in the vehicle's pollution control system. Depending on the faults, there are several possible modes of operation:

The directive states that the connector must be placed inside the passenger compartment. Usually it is located under the steering wheel in the fuse box or under the ashtray near the handbrake.

If you cannot find your diagnostic connector, go to our page location of OBD connectors to help you locate it. 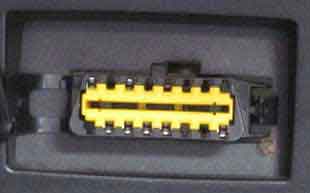 Front view of the vehicle connector (here a Dacia Logan)

PS: It should be noted that the remaining pins may be used by the manufacturer as needed.

Description of the standard

While the port is standardised, several communication protocols remain possible depending on the manufacturers. They are represented below by the 5 columns ISO 9141-2, ISO 14230, SAE J1850, ISO 15765 and SAE J1979. It is the job of the software in the ELM interfaces to decode these various communication standards. Our software, converts the frames from the ELM interfaces into interpretable data based on the SAE J1979 standard.

The protocols based on lines K and L

The protocols described below all use the same medium (same electrical connection). However, differences in the data sent mean that they are not compatible with each other.

This protocol is used mainly by European manufacturers.

ISO14230 is the successor to ISO9141, and repeats the main characteristics. This protocol is used mainly by European manufacturers. Within this protocol, there are 2 "sub" protocols that differ mainly in their level of initialisation: slow init or 5 baud init and fast init.

These protocols (specified by SAE J2818) were mainly used by German car makers prior to the application of the EOBD standard.

Protocols based on SAE J1850

This protocol is mainly used by Ford. But it doesn't necessarily apply to FORDs sold in Europe that use the ISO protocol.

This protocol is mainly used by General Motors.

Protocols based on CAN

This is the protocol that will ultimately be used by all vehicles. It offers the best rapidity and flexibility.

Most often, the diagnostic connector is not the same on this type of vehicle, and looks like the one above

Whatever the protocol used, the OBD defines 10 modes of diagnostic. Not each mode is necessarily supported by the engine ECU (ECM). The more recent your vehicle, the greater the chance of it supporting more modes. The following page list of OBD2 compatible vehicles gives some examples of vehicles tested by users.

This mode returns the common values for some sensors such as:

Each sensor is characterised by a number called PID (Parameter Identifier) used to identify the parameter. For example, the standard stipulates that the engine speed has a PID of 12. The OBD standard (updated in 2007) includes 137 PIDs. As for the modes, not all cars support all PIDs. The page list of OBD2 compatible vehicles gives the PIDs supported in the various modes on certain vehicles.

This mode gives the freeze frame (or instantaneous) data of a fault. When a fault is detected by the ECM, it records the sensor data at a specific moment when the fault appears.

This mode shows the stored diagnostic trouble codes. These fault codes are standard for all makes of vehicle and are divided into 4 categories:

More details and the definition of the generic fault codes are available on our page Standard OBD fault codes.

This mode is used to clear recorded fault codes and switch off the engine fault indicator.

Note : mostly it is not necessary to clear a fault that has not been diagnosed or repaired. The MIL will light again during the next driving cycle.

This mode gives the results of self-diagnostics done on the oxygen/lamda sensors. It mainly applies only to petrol vehicles.
For new ECUs using CAN, this mode is no longer used. Mode 6 replaces the functions that were available in Mode 5.

This mode gives the results of self-diagnostics done on systems not subject to constant surveillance.

This mode gives unconfirmed fault codes. It is very useful after a repair to check that the fault code does not reappear without having to do a long test run. The codes used are identical to those in mode 3.

This mode gives the results of self-diagnostics on other systems. It is hardly used in Europe.

This mode gives the information concerning the vehicle, such as:

This mode gives the permanent fault codes. The codes used are identical to those in modes 3 and 7. Unlike modes 3 and 7, these codes cannot be cleared using mode 4. Only several road cycles with no appearance of the problem can clear the fault.